For some reason or another the Mantelini in the case treated his quondam enslaver with coldness and neglect, and eventually turned her off for another and newer flame. Miss Bradley was a prey to the ‘Green-eyed monster.’ The demon of jealousy raged in her breast. 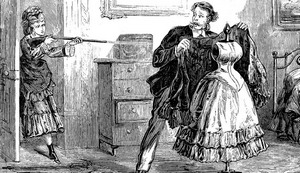 On Saturday night last she chanced to meet the ‘gay Lothario’ with her rival on his arm. Her head seemed to swim, she breathed with difficulty, but contrived to follow the loving pair at a respectful distance.

A turning in the road, however, for a brief period concealed them from her sight. Nevertheless she followed on. Presently she observed young Walkingshaw enter one of the houses in an adjacent street. The people who rented the house in question were well known to her.
She entered, and followed her quondam lover upstairs. In the corner of the passage was a regulation rifle; Miss Bradley seized hold of this as a host of contending passions raged within her breast. Walkingshaw, unconscious of her presence, entered one of the apartments on the second storey.

Miss Bradley, rifle in hand, burst open the door, and beheld her cruel lover’s arms round the waist of what she supposed was her rival. She raised the gun to her shoulders, levelled the piece at the hateful object before her, and fired. When the smoke cleared away the real facts were but too apparent.

No mischief was done; the gun was loaded with blank cartridge only; and so far from embracing her rival before her very eyes, Mr Walkingshaw was but trying the effect of a shawl on a dummy made of wood, canvas, and tow. How matters have been arranged we cannot at present say, but rumour says the case will engage the attention of the gentlemen of the long robe.

An extraordinary phonograph story comes from America. It is said that a Protestant clergyman was very anxious to perform the marriage ceremony for his daughter, but shortly before the day fixed for her wedding he became dangerously ill, and his recovery was pronounced hopeless.

Under these circumstances the dying man ordered a phonograph to be brought to his bedside, and spoke into the instrument his part of the Marriage Service. The phonograph was placed on the Communion table of the church in which the daughter was married to a young merchant of Louisiana, and this voice from the grave, as it were, united the young couple.

Dr. Lankester held an inquest on Saturday evening at the University College Hospital on the body of Henry Taylor, aged sixty-six.
The evidence of Mr E.J. Reading, an undertaker’s foreman, and others, showed that on the 19th instant the deceased, with others, was engaged at a funeral at Kensal Green Cemetery.

The church service having been finished, the coffin and mourners proceeded in coaches towards the place of burial. The day being damp, the foreman directed the coaches with the mourners to proceed to the grave by the footway, and the hearse across the grass towards a grave-digger, who was motioning the nearest way.

The coffin was moved from the hearse and being carried down a path only three feet wide, by six bearers, when orders were given to turn, so that the coffin, which was what is known in the trade as a 4lb leaden one, should go head first. While the men were changing, it is supposed that the deceased caught his foot against a sidestone and stumbled; the other bearers, to save themselves, let the coffin go, and it fell with great force on to the deceased, fracturing his jaws and ribs.

The greatest confusion was created amongst the mourners who witnessed the accident, and the widow of the person about to be buried nearly went into hysterics.

Further assistance having been procured, the burial service was proceeded with, while the deceased was conveyed to a surgery, and ultimately to the above-mentioned hospital, where he expired on the 24th instant. The jury recommended that straps should be placed round coffins, which would tend to prevent such accidents. Verdict – accidental death. 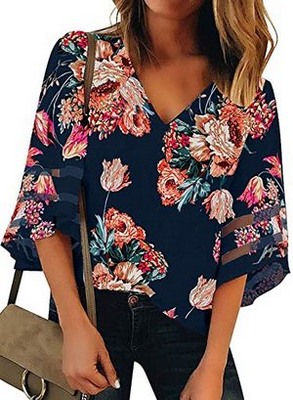 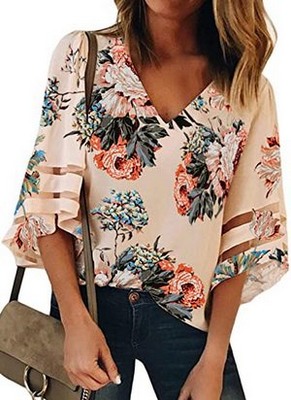